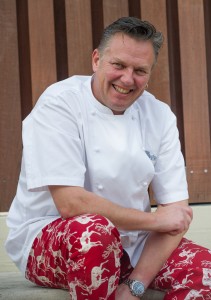 Having grown up amongst farmland on the south island of New Zealand Colin is a country boy at heart, despite living in the centre of Sydney for many years.

Formally trained in Christchurch in the early 80’s Colin headed to Sydney to expand his culinary experience and over the years owned, in partnership, several restaurants including establishing what has now become a Sydney favourite China Doll at Woolloomooloo Wharf.

He gained his experience working at some of Sydney’s best-known establishments including Bistro Moncur, Eastbank, Bayswater Brasserie and Armstrong’s. It was while working at Armstrong’s in North Sydney Colin got his first taste of dry aged beef that forms the base of his menu at The Cottage.

Colin and his family had moved from Sydney to Willow Tree in 2010 where he quickly established a multi award-winning dining experience Graze, at The Willow Tree Inn before moving to Melbourne in late 2013. Colin was keen to get back to the country and needed little persuasion to return to the district and start something of his own.